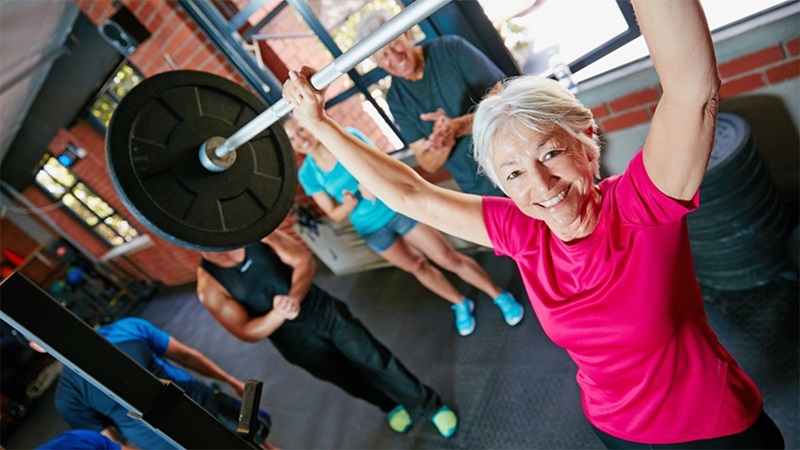 The Effect Weight Training Has on Belly Fat

Does the size of your waistline say anything about your health?

Many consider an expanding waistline to be a normal part of aging, and they’re not altogether wrong. Body shape does tend to change as we age and some of those changes are, quite frankly, unavoidable. However, the good news is that lifestyle and exercise can slow down the process.

The human body is made up of fat, lean tissue, bones, and water. After age 30, we naturally begin to lose lean tissue, including muscle mass. Since muscle burns a relatively large percentage of calories, decreased muscle mass means our bodies are less able to maintain the number of calories we consumed when we were younger. In addition, bones may begin to lose some of their minerals and become less dense. To make matters worse, our metabolism begins to slow, with fat tissue building up toward the center of the body, including around the internal organs.

For many women, changes brought on by menopause can cause body fat to shift to the abdomen. This is likely due to decreasing estrogen levels, which appears to influence where fat is distributed in the body. In fact, until midlife, men have a greater propensity towards excess belly fat, a pattern that usually reverses as women pass through menopause.

Genetics is also a factor. Some of us are simply predisposition to store excess weight around the waist.

The problem of increased belly fat runs deeper than no longer being able to zip up our jeans.

Research shows that belly fat also carries serious health risks. The primary villain is visceral fat that accumulates around abdominal organs. This type of fat is metabolically active and has been strongly linked to a host of serious disease risks, including heart disease, cancer and dementia.

Unlike the cells in subcutaneous fat, visceral fat secretes hormones and a variety of chemicals that have been linked to diseases that commonly afflict older adults. For example, a 16-year study of nurses  found that visceral fat produces retinol-binding protein 4 (RBP4) which increases the risk of developing coronary heart disease. Likewise, The Million Women Study in Britain found a direct link between the development of coronary heart disease and an increase in waist circumference over a 20-year period. The study found that the chances of developing heart disease were doubled among the women with the largest waists - even when other coronary risk factors were accounted for.

It appears that our risk of developing cancer is also raised by belly fat. One Korean study found that the chances of getting colorectal cancer was almost twice as high in postmenopausal women with excess visceral fat. And, a study of over 3,000 women in India found that those whose waists were nearly as big as their hips were three or four times more likely to develop breast cancer.

The good news? The threats can be reduced.

Standard advice says you should simply consume fewer calories than you burn so your body turns to fat stores for fuel, and you subsequently slim down. Weight training, when compared to aerobic activities like running or cycling, doesn't burn a huge number of calories per session. So it might seem more logical to increase the amount of aerobic activity. However, weight training builds and maintains muscle mass in a way that cardio exercise can't.

When you build muscle, you increase your body's ability to burn calories at rest. Muscle tissue requires more calories to maintain than fat. This helps you burn more calories and burn them more efficiently for fat loss all day long, not only when you’re working out.

Resistance training becomes increasingly important as we age, for many reasons, including reducing the accumulation of belly fat.  A study published in a 2013 issue of the International Journal of Cardiology showed that high-intensity resistance training induces faster belly fat loss than cardio activity alone.

In a 12 year study from Harvard School of Public Health, researchers studied the physical activity, waist circumference, and body weight of 10,500 healthy U.S. men aged 40 and over then compared changes in participants’ activity levels to see which activities had the most effect on the men’s waistlines.

The researchers found that a combined program of weight training and aerobic activity led to the most optimal results in terms of maintain a healthy body weight and waist circumference. However, healthy men who did twenty minutes of daily weight training had less of an increase in age-related abdominal fat than those who spent the same amount of time doing aerobic activities.

The study’s lead author, Rania Mekary, a researcher in HSPH’s Department of Nutrition and assistant professor of social and administrative sciences at the School of Pharmacy of MCPHS University, was quoted as saying, “Because aging is associated with sarcopenia, the loss of skeletal muscle mass, relying on body weight alone is insufficient for the study of healthy aging.Measuring waist circumference is a better indicator of healthy body composition among older adults. Engaging in resistance training or, ideally, combining it with aerobic exercise could help older adults lessen abdominal fat while increasing or preserving muscle mass.”

Additionally, a 2010 study in Medicine and Science in Sports and Exercise showed that post-menopausal women who engaged in regular resistance training experienced less abdominal fat gain than their counterparts who do not.

How to Get Started with Resistance Training

Working with a fitness professional can be extremely helpful in designing a balanced weight-training program. Personal trainers can create a customized program and teach you how to perform each exercise so you get the best results and avoid injury.

Regardless, aim for at least two resistance training sessions per week that works all the major muscle groups: back, chest, legs, arms, shoulders, abdominals and hips.