The past couple of decades has seen a sharp increase in the amount of research that’s focused on Power Training for older adults. But what exactly is Power Training? And why is it a particularly important concept for wellness professionals working with the senior population?

What is Power Training?

To understand what Power Training is, let’s start with what we mean by “power”. Power is based on an inherent property of skeletal muscle. We know that as the velocity (speed) of a muscle contracts, the force that the muscle produces is reduced.

This is illustrated with the well-known Force-Velocity Curve. If you’re a professional in the wellness and fitness industry, you’re no doubt familiar with this concept. 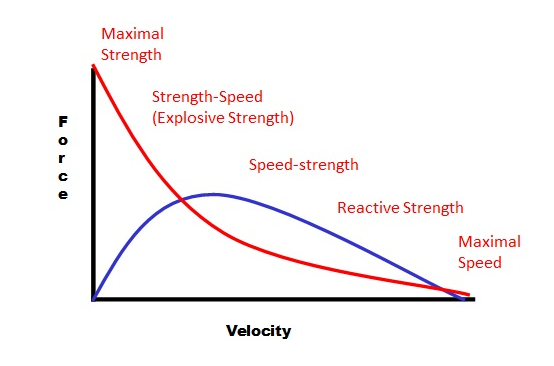 This simple graph illustrates an extremely important concept with just two lines. The horizontal line represents velocity - how fast the muscle is contracting. The vertical line tells us how much force the muscle is producing. If we were to extend the velocity line to the left of the graph, past the point where it intersects with the vertical Force line, we would be able to represent a concept called “negative velocity”.

Negative velocity is an elementary principle in physics that can be illustrated with a simple scenario. Think about performing an arm curl. The goal of an arm curl is to bring the weight up towards your shoulder. However, if you tried to lift a weight that was so great it pulled you back in the opposite direction, you would be experiencing negative velocity. This is an important concept that we'll come back to later.

If we look at everything to the right side of that vertical access, the red line is the force-velocity curve. What it shows us is this: If we start off at the top of the force access line, we are at zero velocity. In other words, the object that we’re trying to move, is not moving.

Going back to our arm curl, if we were to take more and more weight off of the arm curl, we would be able to move faster and faster. That’s what we see in this curve of the red line on the graph above. As the weight lessens, there is less force, and the amount of velocity increases. Simply put, the less resistance we have, the faster we’re going to be able to move.

Simply put, power is equal to the amount of force and velocity. If you look at the place where the blue and red lines intersect, that point represents the maximum amount of force that a body can hold. In other words, at that point, where those two lines intersect, we’d be holding a weight that isn’t moving. It’s at this point that power is maximized.

Why does power become more important as we age?

Starting around the age of 50, the human body begins to lose a very specific kind of muscle fiber. Once it begins, the loss continues at a very rapid pace. In fact, if we were to draw this fiber loss in a curve, we’d see an exponential drop. This loss of muscle mass is called sarcopenia.

The diameter of type II muscle fibers drops dramatically as we age. As this happens, type I fibers start to “group” together, taking the space of the rapidly diminishing Type II fibers.

The human body is constantly going through what’s called a Degenerating- Reinnervation process.This means that the individual fibers that make up your muscles are in a constant state of change. As we age, Type II fibers begin to drop off and are reinnervated by Type I fibers. What we end up with is a decrease in the number of Type II fibers and an increase in the number of Type I fibers.

What does this mean on a personal level?

As we age, we not only get weaker, we also get slower. In other words, we experience reductions in both force production AND velocity of movement, which equals a loss of POWER.

How much does Power change with age? Between the ages of 65 and 89, explosive lower limb extensor power (the power created by our thigh muscles) declines at approximately 3.5 % per year even thought we might only experience a 1-2% decrease in strength per year. In other words, Power drops off 2 to 3 times as fast as strength. This is because we are not only losing cross-sectional muscle area, we are also losing faster contracting fiber.

In elderly males, maximal anaerobic power has been reported to decline 8.3% per decade from age 20 to 70. This means that, without intervention we lose about 50% of our Power output by the age of 70.

Because of this physiological process, many researchers began to ask an important question: If we are losing power as we age, rather than using slow, contractile lifting, why don’t we use lift that’s specific to high velocity movements?

The import relationship between speed and Power.

Research indicates that deficits in power between younger and older persons persists even after adjusting for decreases in thigh cross-sectional area. This is because maximum contractile velocity falls markedly with aging. In fact, velocity (speed) is the major factor contributing to limb power in older individuals.

The important relationship between Power and Fall Prevention.

There is a large body of research showing a strong correlation between Power and Fall Prevention.

A 2002 study found that women who have experienced a fall had 24% less explosive power in their weaker limb than women who had not experienced a fall. When the researchers took a look at the drop in explosive power as a component that leads to falls, they noticed that asymmetry between the limbs may be more predictive of future falls than more traditional measurements of strength. When one limb produces more power than the other, it creates an imbalance that’s highly predictive of future falls. In fact, of all the predictive markers, this imbalance in power may be one of the most important.

There appears to be a strong correlation between power and our risk of fracturing a hip if we fall. Using muscle biopsy techniques, researchers have found that hip fracture patients show significant losses in muscle cross-sectional area, especially in the faster, more powerful Type II muscle fibers.

This is part one in a three-part series about Power Training for older adults. In the next post, we dive into how wellness professionals can assess the degree to which a client might need power training and how to create a program in which clients can optimally train for maximum power gains. Click here to read now.