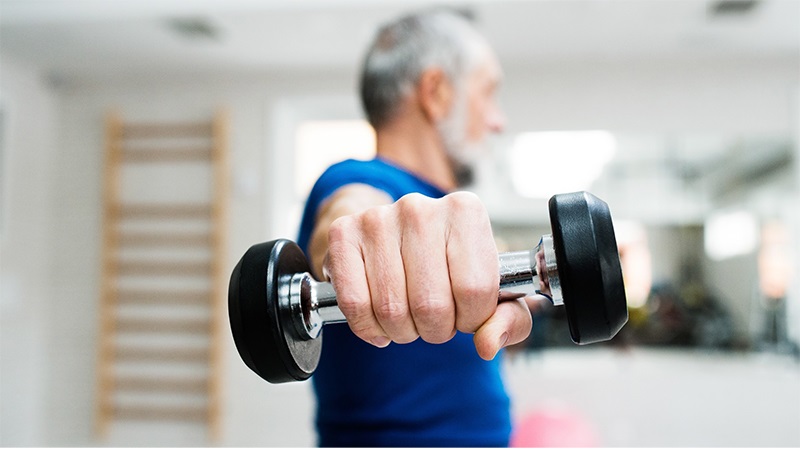 Is there a connection between resistance training and brain function?

We know that exercise is beneficial at any age, but it’s even more important as we get older. Regular exercise has a direct impact on longevity and weight  and reduces the impact of illness and chronic disease. It enhances mobility, flexibility, and balance. Resistance training  has been shown to reduce the risk factors associated with age-related diseases including sarcopenia, coronary heart disease, diabetes, osteoarthritis, osteoporosis, and hypertension.

But, research points to another key benefit of exercise: preserving and enhancing brain function.

How Exercise impacts brain function as we age:

Exercise is critical to preserving brain function as we age and reducing the risk of neurodegenerative diseases. This we know. But new evidence shows that it’s the increase in muscle strength that causes this layer of cognitive protection.

As we age, the volume of white and grey matter in the brain declines.

Neurological studies indicate that by late middle age, most people have begun to develop age-related holes or lesions in our brains’ white matter, the material responsible for connecting and delivering messages between different regions of the brain. What’s worse, the lesions do not cause immediate symptoms for most people. They show up on brain scans long before we notice declines in memory or in our ability to process information. As the years go by, the lesions can widen and multiply, shrinking our white matter and affecting our ability to think clearly.

In addition, several regions of the brain, including the hippocampus and amygdala, appear to decrease in size as we age. Because these regions have a direct impact on cognition, their deterioration can result in a declined ability to process information quickly and negatively impact reasoning ability, attention, and memory.

While any kind of exercise is beneficial, several studies indicate that resistance training might have a greater impact on cognitive functioning than aerobic exercise.

Just like our brains, our muscles shrink with age, affecting our ability to move in the same way we could when we were younger. We walk slower, feel unsteady on our feet, and struggle with walking up the stairs, lifting heavy items, and getting up from a chair. Now we’re learning that these changes in gait might also be an indication, or a direct contributor to, declines in brain health, including shrinking white matter.

In a study conducted in March of 2017, participants with mild cognitive impairment adhered to a resistance training program for 6 months. Results showed improvements in whole-body muscle strength and aerobic capacity in all participants. In addition, participants experienced a significant improvement in cognitive functioning.

A 2016 study published in the Journal of the American Geriatrics society also demonstrated the effect that weight training has on memory and reasoning in older adults. The study included 68 women and 32 men, ages 55 through 86, all of whom had mild cognitive impairment. Participants were randomly assigned to one of two groups. One group engaged in weight training 2 times a week for six months, lifting 80% of the maximum amount they could. Participants in the second group completed stretching exercises only.

All participants were given cognitive tests at the beginning and end of the study, and then another test 12-months after study’s completion. The group that engaged in 6 months of weight training scored significantly higher on tests conducted immediately after the study, an improvement that they retained after 12 months.

A 2015 study, also published in The Journal of the American Geriatrics Society, enlisted a large group of women between the ages of 65 and 75, all of whom had a brain scan showing existing white matter lesions. The women were tested for gait speed and stability, then randomly assigned to one of three groups.

After 1 year, the women were given another brain scan and an assessment that measured walking ability. The women in the third group, who’s  only involved stretching and balance training, all showed a progression in the number and size of the lesions in their white matter. In addition, they were walking slower and showed declines .

The women in the second group, who had engaged in once per week strength training, also showed a progression in the number and size of the lesions in their white matter and an overall decline in gait.

But, the brain scans of the women in the first group, who had participated in strength training twice a week, displayed significantly less shrinkage of their white matter. Their lesions had grown and multiplied, but at a fraction of the rate of the women in the other two groups. In addition, they were able to walk faster and with greater stability.

Researchers agree: Weight training is good for our brain.

While researchers do not know exactly why strength-training has such a positive impact on cognition, it’s clear that it does. This new information has important implications for how medical professionals, fitness trainers, and senior living communities approach exercise programs for older adults. It’s not enough for seniors to engage in regular aerobic exercise.

Resistance training is also an essential component  the health of the body - and the brain.