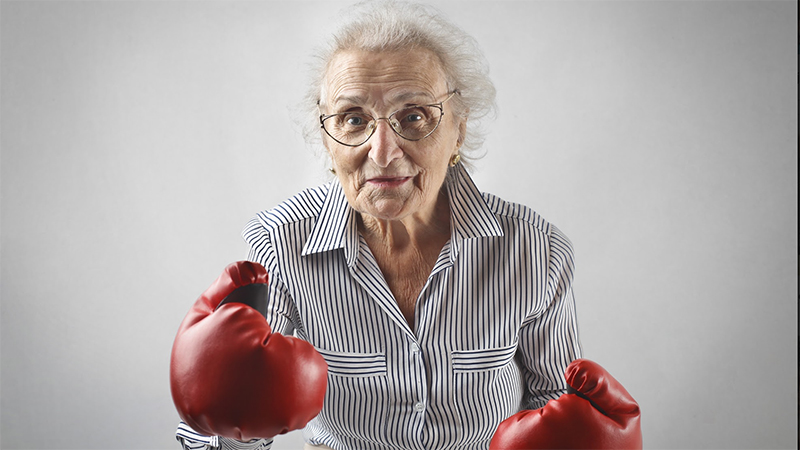 Power Training For Older Adults: How To Assess Power

This is part 2 in a three-part series about Power Training. Click here to read Part 1.

As we age, we experience reductions in both force production AND velocity of movement. This equates to a steady loss of POWER beginning sometime in our 50s. For personal trainers and fitness professionals working with older adults, this knowledge means that Power Training is an important part of clients’ physical fitness plan.

But, before intervention comes assessment.

How do we assess power?

Over the years, researchers and fitness professionals have used a number of different methods to assess power, including isokinetic and pneumatic machines. In general, these tests are effective, but they also have some problems. Many are not task specific, and most are expensive, not portable, and dangerous for older adults.

As an alternative, some fitness professionals and researchers have developed predictive equations to analyze power with simple exercises that allow the measurement of both force and distance, like a 30-second chair stand test. After all, if you can multiply force by distance, you will essentially arrive at the rate at which someone did work for power.

Equations like this allow fitness professionals to do pre-training and post-training assessments that can be extremely useful. Even simple pre and post-measurements of how many times an individual can stand from a chair during a 30-second period will help to assess increases in power. But if you want to get more specific or targeted, additional tools are required.

How to Assess Power with HUR SmartTouch

The latest update in HUR SmartTouch technology allows for accurate, targeted pre and post-assessments of an individual’s level of power. The user interface on the HUR SmartTouch Hi5 displays vertical bars which demonstrate the peak power of each repetition of a particular exercise, while a horizontal line represents the power target. The technology automatically updates the power target based on recorded information from previous training sessions.

Trainers and fitness professionals can use HUR SmartTouch Hi5 to ensure clients are moving through each training session safely and with targeted effectiveness that will build muscle strength and increase power. All users have to do is identify and select the exercise they want to perform on the touchscreen and their personal power target will automatically display and track their progress.

Beyond Assessment: What are the factors that tell us HOW to optimally train for power?

If we go back to looking at the Force-Velocity Curve, we can see that when we multiply the force times the velocity of a movement, there is a point where we reach maximum power production.

So, we know we can target for power or for strength. Which begs the question…

How much resistance should we use to maximize power training in an older client?

Joint specificity is also important. Power training is specific to the joint moving during an exercise. High speed training increases power better than low speed training at both intermediate and high testing speeds during knee extension, showing that the knee extensors are very responsive to speed specific training.

The leg muscles in particular are highly susceptible to high-speed training and not very susceptible to changes in power at low speed. In contrast, the ankle dorsiflexors show similar increases in power during BOTH high speed and low speed training. And, the ankle plantar flexors respond more favorably to low speed rather than high speed training, but still showed speed specific changes since power improvements were greatest at the lower and intermediate test speeds.

Making things more complicated, these factors may be a “moving target”, changing as individuals train.

The greatest problem involved with high-speed training is inertia.

Once a weight is accelerated against gravity, depending on its mass, it will develop a certain momentum. As we know, basic laws of physics dictate that once an object starts moving in any direction, it wants to keep moving in that direction.

If you measure the amount of force it takes to move the body away from the ground during a squat, you’ll see a bimodal curve – a large weight increase before it drops off, then another smaller weight increase before it drops off again. When moving at high speeds, the weight moves away from the body slightly, before coming back. This demonstrates that we don’t have full power overload through the entire range of motion.

Another problem with inertia is that joint injury can happen as a result of deceleration before the end range of motion.

So, how do we deal with the problem of inertia?

Ideally, we utilize training techniques and equipment that minimizes the problem.

In the third part of this series we’ll dive into specific exercises and equipment that maximizes the development of power while minimizing the dangers and inefficiencies of traditional high-speed strength training.