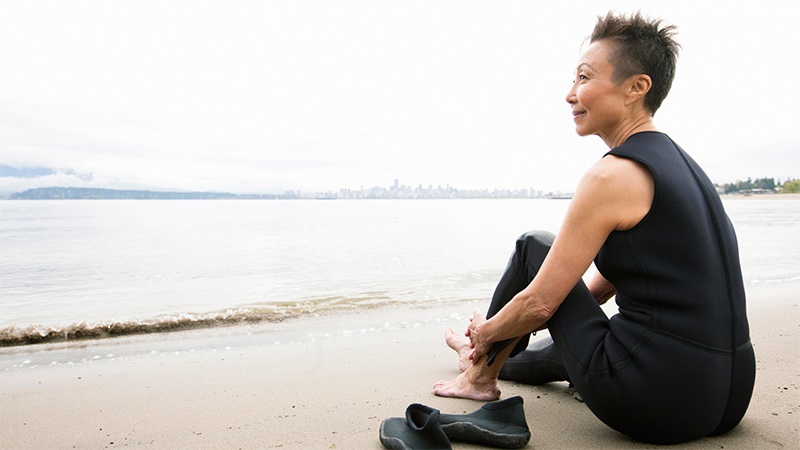 How Exercise Impacts Sleep for Seniors

Our sleep patterns change as we age. On average, people in their 70s sleep an hour and a half less than they did when they were in their 20s. Many older adults find it more difficult to fall asleep at night, wake up more often during the night, and find it almost impossible to sleep past dawn.

In addition, as we age less time is spent in deep, dreamless sleep. On average, seniors wake up at least 3 or 4 times each night, are more aware of being awake, and don’t fall back to sleep as quickly as when they were younger. What’s the reason behind these changes in sleep patterns?

One recent study offers a neurological explanation for why we tend to sleep less as we age, asserting that a cluster of neurons associated with regulating sleep patterns may slowly die off as we get older. The theory is that the more of these cells that we lose, the more difficult we find it to go to sleep and stay asleep for a long enough to wake feeling rested.

Poor sleep is not a “normal” part of aging.

Although sleep patterns change as we age, poor sleep is not a normal part of aging. And yet, according to a national poll, about half of today’s seniors believe it is. Because many older adults do not believe that poor sleep is a problem, or a contributor to other health issues, they are not talking to their doctors about it. This is concerning, because poor sleep is a serious health issue.

Sleep plays a critical role in thinking and learning. Lack of sleep hurts these cognitive processes by impairing our ability to focus and remain alert, making it difficult to concentrate, and even clouding our ability to reason and problem solve.  In addition, sleep plays an important role in consolidating memories, solidifying experiences and things we’ve learned that day. Even worse, sleep deprivation can increase our risk of serious health problems such as heart disease, high blood pressure, and diabetes and increase our risk of falling.

What’s the connection between exercise and sleep?

In 2017, The University of Michigan published the “National Poll on Health Aging.” The survey indicates that sleep doesn’t come easily for about 50% of older adults in America, and many are taking too many prescription and over-the-counter drugs to remedy the problem. When asked what keeps them from sleep, 23% said it was because of pain. 40% said that their overall health was fair to poor. Other reasons for sleep troubles included having to get up to use the bathroom at night, as well as worry or stress.

Q: What’s one thing that can help the body heal from injury, improve overall health, and reduce stress and anxiety?

A substantial body of research shows evidence that consistent weekly exercise can contribute to healthier, more restful sleep, improving both quality and duration of sleep, and may even help improve chronic sleep issues such as insomnia.

One recent study concluded that participants slept significantly better and felt more alert during the day when they engaged in just 150 minutes of exercise each week. Research from Northeastern University reports that when older women suffering from insomnia engaged in regular exercise their sleep improved significantly, they reported having more energy during the day, and were less depressed. What’s more, consistent exercise may reduce the risk for developing troublesome sleep disorders, such as sleep apnea and restless leg syndrome.

Time of day matters… for some people.

Some research shows that early morning and afternoon exercise may help reset the sleep wake cycle by raising body temperature slightly, then allowing it to drop and trigger sleepiness a few hours later. It can be especially helpful if you are able to get at least a few minutes of exercise outdoors and let your body absorb natural sunlight during the daytime hours.

On the flip side, exercising too close to bedtime may actually interfere with sleep for most people. Late day workouts leave many people feeling energized and stimulated right before bed, making it difficult for our bodies to make the transition from wakefulness to sleep. So, how late is too late?

For the average person, body temperature remains elevated for about four hours after a workout. This can interfere with the ability to sleep because, starting in late afternoon, our bodies begin preparing for sleep by dropping our core body temperature slightly. This lower body temperature contributes to feeling drowsy. For some people, reversing that process by exercising late in the day can keep them awake. Compounding the problem, exercise increases our heart rate and prompts the release of adrenaline.

And the National Sleep Foundation's 2013 "Sleep in America" poll, which studied the sleep habits of 1,000 participants, found that an overwhelming majority (83%!) of people who exercised at any time of day (even late at night) reported sleeping better than those who didn't exercise at all.

So… how late is too late for that workout? The answer is simply whatever works for you.