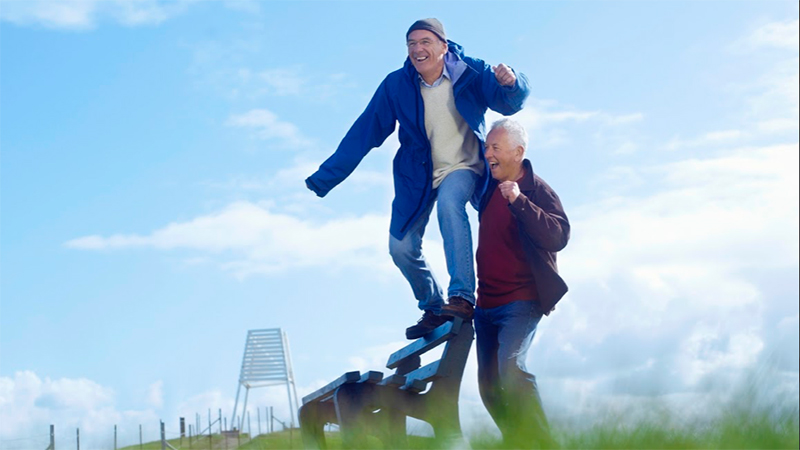 Power is for Everyone: High-Speed Strength Training for Older Adults

Dr. Joseph Signorile, PH.D. was our recent guest presenter for an educational webinar focused on the importance of high-speed training for older adults.

Dr. Signorile is a professor at the University of Miami in the Department of Kinesiology in the Center for Active Aging. He has been involved in research using exercise promote independence and fall prevention in older adults for over 25 years and is a pioneer in applying high-speed resistance training to improve function and reduce falls. He continues to work on new technologies and interventions for fall prevention and active, healthy aging.

During the webinar, Dr. Signorile discussed:

The following information was derived from this very important presentation.

Why is High-Speed Training important for active aging?

High-speed training has been used for decades to increase power in populations ranging from competitive athletes to older adults who want to reduce their risk of falling and minimize the loss of independence as they age. 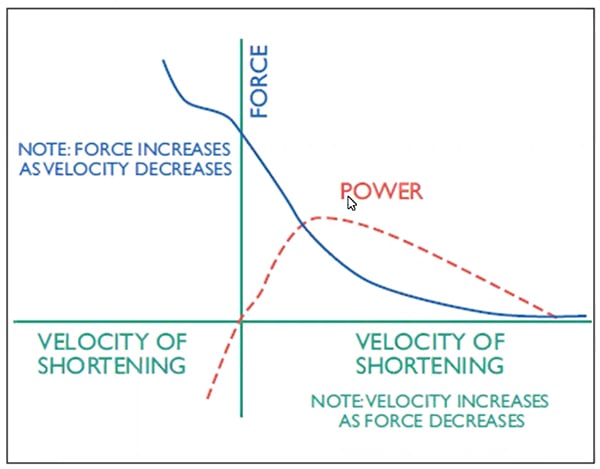 Resistance training is typically about manipulating the load.

The change of load dictates the velocity of the exercise. This is represented in the Load-Velocity Curve, which represents using load to dictate velocity. 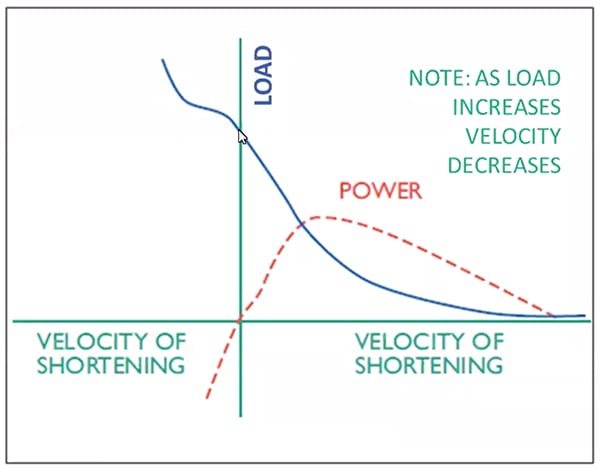 As you can see from the graph above, somewhere in the middle of the Load-Velocity Curve is the opportunity to maximize power.

Why is power important as it relates to aging? 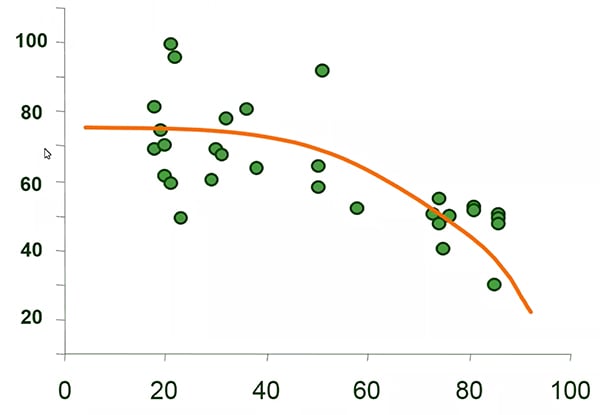 Perhaps even more important, is that the fibers that are most affected by aging are Type II fibers, Type II Fibers are the faster contracting fibers and are represented in red on the graph below. 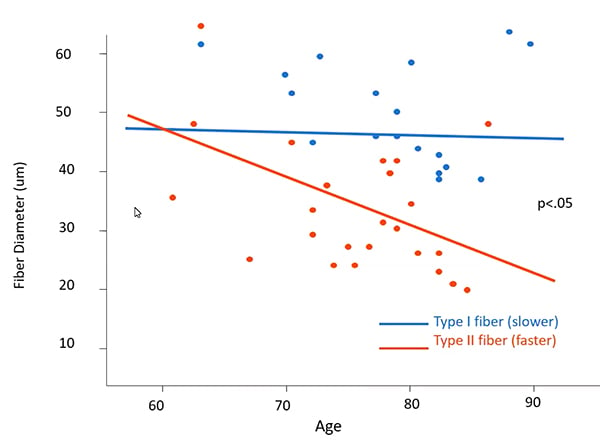 As we age, we not only get weaker from the number of fibers and the reduction of cross sectional area of those fibers, we also lose velocity of movement. In other words, we get slower.

Since force times velocity equals power, reductions in both force production and velocity of movement, equals a loss of POWER.

How much does power change as we age?

A 1994 study (Skelton et al.) found that between the ages of 65 and 89, explosive lower limb extensor power declines 3.5% per year compared to 1-2% per year decrease in strength.

Another study found that in elderly males, maximal anaerobic power declines 8.3% from the age of 20 until the age of 70. (Bonnefoy et al. 1988)

Two other studies, in their attempt to understand the elements that determine maximum power, found that the most important factor for older adults is speed of movement. (De Vito et al., 1998, and Herman et al., 2005)

Several other studies have concluded that power is one of the major performance variables associated with independence, fall prevention, and rehabilitation following injury. 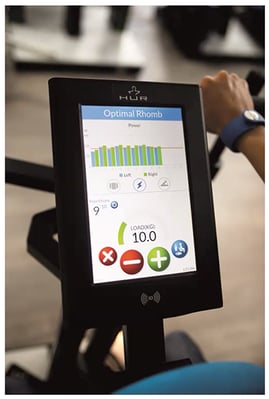 Power output displayed for each repetition.This is very important because as exercisers are moving through their workout and working towards completing a set number of repetitions, they can have a goal of trying to maintain power because they can watch how power changes across the entire set.

Side-specific data and shows bilateral strength imbalances.This allows us to examine whether or not there are bi-lateral differences in both strength and power. This allows us to give a training program that might address power more on one side than the other if a discrepancy is found.

Baseline goal, target display. Baseline goals can be predetermined and programmed into the system. The target is displayed on the touch screen so individual users can see it easily.

Tracks compliance.This is important because while fitness instructors can set up a program for their clients, if the person doesn’t follow it, the plan is useless.

Auto-progression.Once the program is set up, the individual can train independently, and the level of resistance and number of reps will automatically increase as they gain power and strength.

How to Maximize Power with Strength Training Programs for Older Adults

Since Power is the product of force times velocity, if we train at the load end of the curve we cannot maximize power because even though load might be high, the velocity is too low.

Likewise, if we shift over to the velocity end of the curve, so that load is low but velocity is high, we still cannot maximize power output because load is too low. 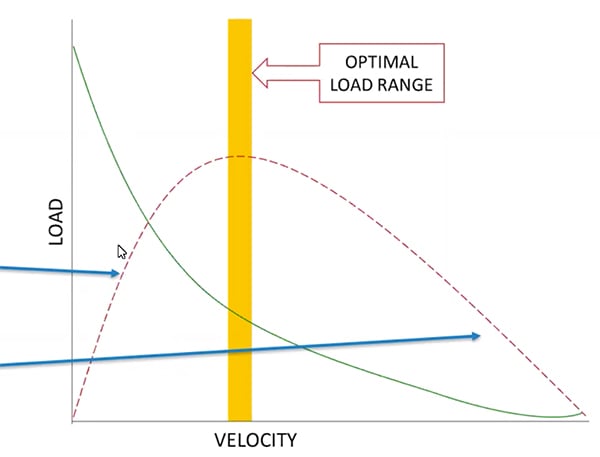 While it varies from person to person, it’s in that mid-range between velocity and load that allows us to train for increases in power.

For older adults, the best training plans are based on the results they want to achieve. This means that the training prescription should reflect the daily activities that each individual wants to target by matching the amount of load against gravity that the activity requires. 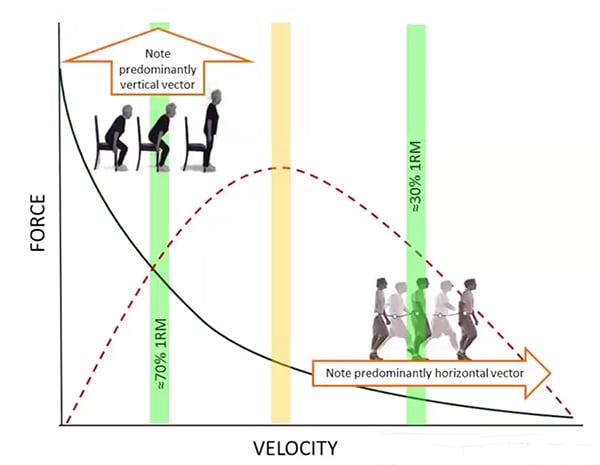 The Importance of Pneumatic Strength Training

Pneumatic strength training equipment is ideal for older adults because it eliminates many of the problems included in traditional weight stack machines.

1. The problem of inertia. The greatest problem involved with high-speed resistance training using traditional weight-stacking machine is inertia. As the user moves the weight,  it develops momentum at the beginning and end of the movement, losing momentum in the middle of the move.

This creates a loading and unloading problem and a need to decelerate the weight early in the range of motion to reduce the potential for injury. This is not the case for pneumatic strength training machines.

2. Loading throughout the natural length-tension curve. Pneumatic resistance allows uninterrupted movement thorough the entire range of motion. This is in contrast to weight-stacking machines which show interrupted loading patterns throughout each movement.

3. Minimal Loads can be too heavy for older adults. In traditional weight-stacking machines there is minimal resistance load that is dictated by the weight of the plate. For many older adults, that minimal load is too much for safe training. Pneumatic machines offer a continuous resistance variable with zero starting load and very small increases in resistance.

With one swipe of a wrist band, the machine will automatically adjust to the individual for maximal biomechanical efficiency. This functionality allows for safe, independent use, freeing up the time of the trainer. Once the trainer sets the parameters for each individual, the machine will automatically adjust to those parameters.