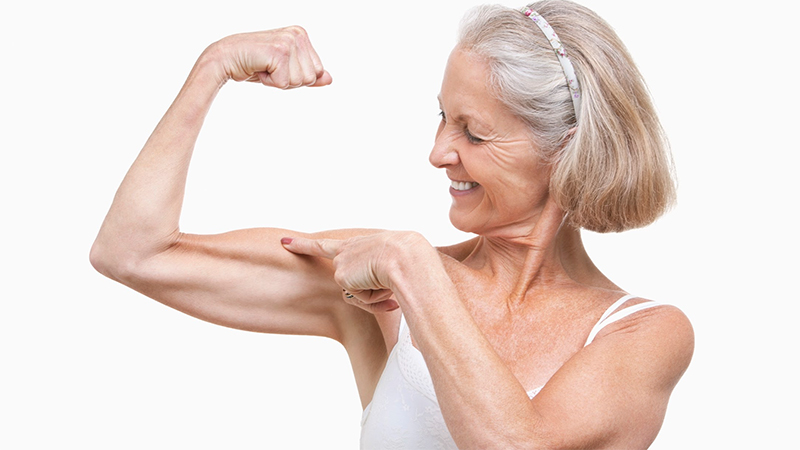 Getting Stronger Year after Year

The Importance of Progressive Resistance and Safety for Senior Strength Training

This method of resistance training is an effective way for anyone at any age and fitness level to build strength, recover from an injury, and increase general physical fitness. However, it is an especially important method for senior fitness because it controlled progress is one of the safest ways to train.

Progressive resistance is essential for building strength, recovering from an injury, and increasing general physical health. No one decides to run for the first time one day and then sets out to run a marathon the next.

Regardless of the starting point or end goal, slow and steady progress is the name of the game.

Our bodies are remarkably adaptive to new situations. When performed consistently, a new fitness routine that feels challenging today will seem overly easy in a couple of weeks. This is because of the body's incredible ability to adapt to new levels of physical activity and rise to the challenge of new physical demands.

Today, it might feel difficult to perform an exercise that requires your legs to move 25 pounds of weight. But, if you consistently repeat the exercise several times a week, your muscles will rise to the challenge, increasing in strength until 25 pounds of resistance feels easy. At that point, you must increase the amount of weight if you want to continue to build strength. Continuing to lift the same 25 pounds week after week will maintain the muscle and strength you have already built, but it won’t do anything to make you stronger.

How to build Progressive Resistance into Any Strength Training Routine

One of the most important things to remember when building progressive resistance into a strength training routine for seniors is that increases in resistance must be very, very small. This presents a problem when working with standard strength training machines because weight is often built in 5 – 10-pound increments. In some machines, the user can increase weight in 2 to 1-pound increments, but even that is too large of an increase to maintain strict safety standard for many seniors.

Most seniors should begin a new strength training exercise with zero resistance and progress in as little as 1/4-pound increments.

In general, it’s a good idea for anyone beginning a completely new strength training routine to begin with zero starting load. This means working on a machinethat allows you to complete an exercise with zero resistance.

Another option is to begin a strength training routine with exercises that use body weight as the only amount of resistance. Exercises that use one’s own body weight for resistance include squats, sit-to-stand exercises, push-ups, lunges, and methodologies that progress through a full range of motion, such as Thai Chi, Pilates, and Yoga.

It's important to note that while using one's own body weight as resistance is an excellent method for some seniors, it's extremely unsafe for others. If a senior is carrying too much excess body weight, this method can provide too much resistance to start. Other challenges such as  joint problems, a limited range of motion, and balance issues, make off-machine body weight bearing exercises completely unsafe and ineffective.

#2. Increase the amount of weight while keeping the number of reps consistent

HUR Machines, fitted with HUR SmartTouch technology, track each user’s training progress and automatically increase the amount of resistance with each plateau. Without automatic tracking and adjustments, it’s important to carefully track progressive increases to prevent injuries that can occur when too much resistance is added to quickly.

Just like being careful about increasing the amount of resistance in very small increments, it’s important to add reps and the number of sets completed during one training session slowly and consistently over time.

#4. Shorten the Length of Resting Time Between Sets

In general, it’s a good idea to rest for 30 to 60 seconds in between sets of the same exercise. But, one way to progressively increase intensity is to shorten the amount of rest time between sets to as few as 10 seconds.

When following this method, it’s important to pay close attention to form. If it becomes difficult to maintain good form during the second set of any given exercise, it’s a good sign that you need to either increase the rest period or lessen the amount of resistance on the second set.

#5. Lengthen the Time Under Tension

The “time under tension” refers to the amount of time it takes you to move through an exercise, start to finish. If you maintain the same amount of resistance and number of reps but simply slow down the movement, your muscles will need to work for a longer period of time, thus increasing the level of resistance.

For example, slow each repetition on the leg press down from 4 seconds to 6 seconds. Or, when performing a squat, hold the squat at the bottom of the move for 2-4 seconds before raising back up into a standing position.

Nothing slows progress like an injury. As the level of resistance increases and new machines are introduced, it’s often a good idea to incorporate exercises that use more than one joint and muscle group at a time, such as the leg press, chest press, and HUR Pulley and HUR Pulley Light

When used correctly and in a controlled progressive resistance environment, machines that require multiple muscle groups and a wide range of motion are often a safer and more effective in building muscle mass.

Even for seniors who prefer to train independently, it’s important to work with a fitness professional to create an appropriate training plan, and make adjustments and recommendations along the way.